Tech trends 2017: Convergence – Not the movie

Convergence. Sounds like the title of a dodgy b-movie, doesn’t it? And it is. In fact, there are several. But I’m not concerned with badly-scripted, straight-to-streaming films today. Convergence is one of the hottest subjects in the tech press at the moment, particularly in the area of cloud services and productivity tools. For tech trends 2017: convergence is likely to remain there and here’s why.

Some are euphemistically calling it a bundling event, which sounds like a Black Friday sale at Walmart, but it amounts to the same thing: implement or acquire exactly the same features as everyone else and force them into your core product. In other words, the tech equivalent of a huddle of hipsters hanging out in the same Dalston dive and choosing to assert their individuality by growing exactly the same beard.

Dropbox announced its new suite of productivity tools, which amount to a loosely-related collection of features that have been cherry-picked from the likes of Evernote, Office 365, Quip and others. 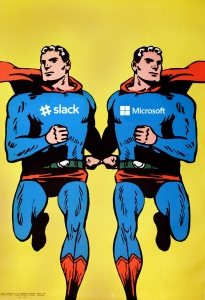 Slack integrated voice calling into their product earlier this year, just in time for Microsoft to announce Teams, which is essentially Slack with voice and video calling (as noted by CEO Stewart Butterfield in a full-page ad in the New York Times). In a move that surprised nobody, Slack responded this week with the addition of video calling (sadly lacking the very useful screen-sharing facility in Teams). Incidentally, both of these products look a lot like Yammer, which is, of course, owned by Microsoft.

I don’t know about you, but I’m struggling to keep up. You might argue that this sort of product convergence is good for competition and consumer choice; I can see that argument too. The problem for end-users is when every product claims to do everything for everyone, how do we choose the right one?

Convergence is just another way of saying the current trend in tech is to value convenience over function. If it continues, we will simply end up with a selection of cloud-based multi-tools and users will find themselves choosing between the digital equivalent of a tin-opener attachment or the tool for removing stones from horse’s hooves.

The trouble is, as anyone who has ever tried to fix a car with a Leatherman or put up a shelf using a Swiss Army Knife will know, these general-purpose tools will only get you so far. They are fine for simple tasks, but bigger projects require more specialised and sophisticated tools to get the job done well.

It’s a feeling that will be familiar to anyone who has ever tried to perform some serious financial analysis using an online spreadsheet (assuming you’ve solved the not-insignificant problem of accessing the data you need in the cloud), or do something as simple as generating a table of contents in the online version of Microsoft Word.

When it comes to technology, imitation is not the sincerest form of flattery; integration is. At ipushpull, we are striving to bring together the tools you know, whether on desktop or mobile, with the accessibility of the cloud. We don’t believe convenience has to come at the cost of function, and we certainly don’t subscribe to the view that you need to give up the powerful, fully-featured applications you need in order to be productive.

The list of tools we are integrated with is expanding continuously, and now includes Slack, WordPress, Microsoft Teams, PDFs and of course Excel. You can chat in Slack with your team while viewing live updating data, host it on your WordPress website, or simply view live data on your mobile with our platform.