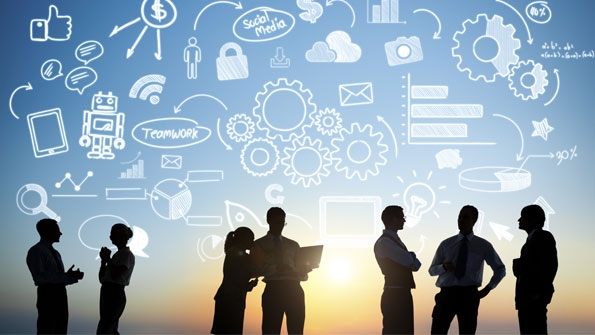 The Future of Work – Symphony, the Latest $1bn Unicorn

2017 has been an interesting year for the enterprise workspace collaboration market with Symphony becoming the latest unicorn fetching a valuation topping $1bn -which means Wall Street now has its own coveted ‘unicorn’ tech company. Symphony now ranks, and competes, alongside Slack, Microsoft, Google and Facebook in the enterprise collaboration market…. and…. of course…. Bloomberg.

Who is Symphony (aka the latest $1bn unicorn)?

Formed in 2014, when Goldman Sachs, leading a consortium of tier 1 banks, acquired Perzo for $60m from founder David Gurle, Symphony combined Perzo’s expertise with Goldman’s own internal chat platform Live Current. With David Gurle at the helm as CEO, Symphony set out to standardise industry-wide communication including end-to-end encryption and regulatory compliance that is necessary for financial markets.

Initially, onlookers saw Symphony as a rival to Bloomberg due to its prestigious banking shareholder roster but it is clear that Symphony has much bigger ambitions. Although Symphony customers are based in financial centres around the world the company still retains its HQ in Palo Alto because, ultimately, that is where the competition is.

Why the ‘Bloomberg killer’ title then?

Within the front office of banks, asset managers, hedge funds and brokers – Bloomberg is king. With 325,000 terminals around the world, Bloomberg has become an icon and essential piece of kit on trading floors everywhere. Because of this, a huge network has formed of alpha producers that are plugged into Bloomberg’s own messaging service called IB (Instant Bloomberg) with the sell-side (banks, brokers) talking to the buy-side (pension funds, mutual funds, hedge funds) with traders and brokers exchanging news, gossip, orders and flow.

However, outside of the front office environment banks lack a unifying chat platform. Most banks will use a combination of messaging platforms such as Eikon messenger (formerly Reuters messenger, note that Gurle was Reuters Global Head of Collaboration), Skype for Business (Gurle was GM at Skype), ICE chat, Pivot, AOL, Yahoo (now defunct) and Microsoft Lync. Communication problems occur because there is no interoperability between these messaging platforms – they don’t talk to one another – so inter-bank communication often falls back to email.

Earlier this decade it was not uncommon for staff outside of the front office environment such as operations, risk, compliance and management to have a Bloomberg terminal just to access IB chat. However, due to cost-cutting across the financial industry, this is no longer the case due to Bloomberg’s very high subscription costs.

Since Symphony’s launch 18 months ago it has quickly amassed 200,000 users, albeit a large proportion is from the same banks that invested in the company, but there is now significant traction among large buy-side players with T.Rowe Price and AllianceBernstein joining Blackrock as users.

The key to continued fast growth, which is essentially powered by the ‘network effect’, is twofold; in the front office for each buy-side Symphony user, there could be anything from 5-10 sell-side Symphony users vying to win their business. Away from the front office if Symphony becomes an internal chat platform of choice for a bank, then user numbers will swell because for each front office salesperson or trader there may be another 10+ support staff in the back and middle office who need to communicate with them. If Symphony’s ‘pod’ is enabled for inter-bank communication then the back office staff can also chat with their counterparts at other banks, adding further Symphony users and ‘stickiness’ to the platform.

Symphony is aiming for 300,000+ users by 2018 which would rival Bloomberg and Reuters within financial markets, except the established vendors are limited to front-office users only. With the recent $63 million fundraise, Symphony is setting its sights much higher and are planning to expand into other security-conscious sectors such as government and healthcare as well as enhance functionality on the platform to include features such as video calling.

Bloomberg and Reuters have had a stronghold on high-cost financial terminals for decades, leaving other vendors way behind. However, one factor that led to the creation of Symphony was Bloomberg’s now infamous snooping of users' activity which came on the back of complaints made by Goldman Sachs and JP Morgan (later becoming major shareholders in Symphony). Financial market players are a paranoid bunch who do not take well to being spied on.

Bloomberg does provide a lot more than just messaging, yet a large proportion of its user base only uses a fraction of the terminal’s functionality. For these users cost then becomes a major factor. Bloomberg charges around $2000pm, with no discounts for higher user numbers and contracts, for a minimum of two years. To put this into perspective, in 2015 JPM had 7000 Bloomberg terminals and Goldman had 5000, that’s more than a combined $250m a year in subscriber fees alone. Since the financial crisis banks have been in the cost-cutting mode so any reason to reduce costs will be looked at. It’s no coincidence that last year Bloomberg lost terminals over a 12-month period for only the second time in its history (losing 3000 terminals to 324,485, although still managing to take home $9.2bn in revenue).

When it comes to cost Symphony is in a different league. Access to the young, disruptive technology company costs $15pm per user for corporate access.

In a workflow where back-office staff use Bloomberg chat to communicate with the front office or to simply check reference prices then $2000pm vs $15pm is a no-brainer. For sales and traders in the front office, maybe not so much – there is a lot of invaluable functionality on a Bloomberg terminal. But Symphony doesn’t need to build everything itself. It has opened up the ‘Symphony Marketplace’ where tech companies and financial market vendors can add features and functionality that would otherwise be hard and expensive to build. In addition, Symphony has an Open Source Foundation which is an environment to share ideas and shape the direction of development, with members spanning across the financial market space.

On the other hand, Bloomberg is a walled garden, restricted to the alpha producers – as the Financial Times put it, “Symphony similarly aims to spread widely rather than seizing the high ground“.

Compliance, oversight and security go to the very core of Symphony. Goldman’s original messaging platform called Live Current was created to meet the stringent regulatory requirements of the financial industry. According to financial regulations, confidential client information must be secure and separate from internal business functions and banks must “retain unaltered, auditable and retrievable records of information flows with demonstrable, proven controls and surveillance“.

This is one of Symphony’s biggest selling points and where a large portion of the millions of dollars raised has been put towards. Symphony clients hold their own encryption keys and compliance departments can review and recall full audit trails and the history of conversations and interactions of everything in the Symphony environment.

Symphony describes itself as a ‘platform that powers work’ for secure workflow, communication and collaboration. With 140 billion business emails sent daily with an average of 6 attachments per day (which would be fair to assume is substantially higher within a back office environment at a bank), staff in operations and middle office want to move away from inefficient emails going backwards and forwards with attached Excel spreadsheets. In today’s workplace, email is no longer the best way to communicate – Symphony’s Palo Alto staff would argue moving to a secure, audited ‘social operating system’ means the entire financial market ecosystem (and lots of others to follow) will benefit from improved productivity, efficiency and workflow.

One lesson Symphony has learnt from Slack is to allow developers to build their own applications inside their platform which means content from other services is pulled into one location for the end-user, which avoids productivity-killing ‘context switching.

ipushpull has been working with Symphony to enable live connections into the messaging environment from data applications such as Microsoft Excel or internal databases. Both Symphony and ipushpull are striving for interoperability across applications and across data.

Complementing Symphony’s real-time collaborative environment ipushpull is targeting significant improvements in back office workflow by removing the need to attach files, such as spreadsheets, when working on trade breaks or reconciliations with traders or counterparties and instead share and collaboratively work on data, helping to reduce context switching into other applications and avoid email entirely.

Symphony is ideally placed to benefit from both intra-bank and inter-bank communication. “Cross-company collaboration is critical to streamlining complex workflow and to helping people work efficiently“, according to the CEO of MarkitSERV and Gurle sees “a pressing need in financial services to simplify disparate communications streams” and expects “to see a tidal wave of innovation to streamline traditional financial services workflows”.

Bring in the ability to add bots to a user's chat to automate and reduce manual workloads and set trade alerts and notifications that are integrated into banks' internal systems, then the potential market for Symphony suddenly looks a lot bigger than Bloomberg’s. Morgan Stanley thinks “Symphony could be the gateway for financial market participants to move away from traditional bundles to lower-cost products” with “unbundling likely leading to increased competition given that new entrants can compete on individual parts of a legacy product“.

With a fresh funding round of $63 million Symphony will be throwing its bank balance and pushing the ‘network effect’ harder than ever.